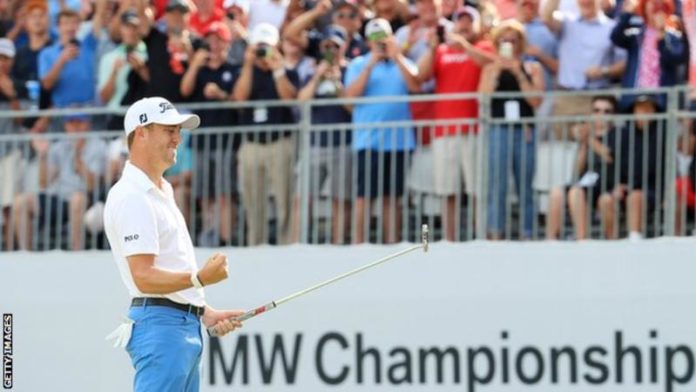 bbc| American Justin Thomas claimed the BMW Championship by three shots at Medinah.Overnight leader Thomas, who set a new course record with a third-round 61, closed with a 68 to finish 25 under.

Fellow American Patrick Cantlay was his nearest rival on 22 under while Japan’s Hideki Matsuyama shot his second 63 of the week to finish two further back.

Tiger Woods finished on seven under and will not defend his title at next week’s season-ending Tour Championship after missing out on the 30-man field.

Only the top 30 on the PGA Tour’s FedEx Cup points list are eligible to play at East Lake in Atlanta.

In order to qualify, Woods – who has struggled with injury and form since claiming his 15th major at the Masters in April – needed to finish 11th or higher at Medinah, but was tied for 37th after a closing 72.

“Last year culminated in a pretty special moment for me and it would’ve been nice to go back there,” Woods said. “But I’ll be watching the guys on TV.”

Thomas now leads the points standings after a 10th PGA Tour victory that was secured thanks to four birdies on the back nine.

England’s Tommy Fleetwood was tied for 11th on 13 under with Northern Ireland’s Rory McIlroy two shots further back.

Earlier in the day, five-time major winner Phil Mickelson almost missed his tee time after lightning set fire to the roof of his hotel.

The American had been evacuated from his hotel, but managed to retrieve his clubs from his room in time and eventually carded a 71 that left him at five under.

“Kind of a funny deal,” he said after his round. “There were 10 fire trucks. I got in my car and left and couldn’t get back. The roads were closed and the hotel was closed.

“But things cleared up pretty quickly. I was able to get back in and get my stuff. It all worked out great – except my score.”