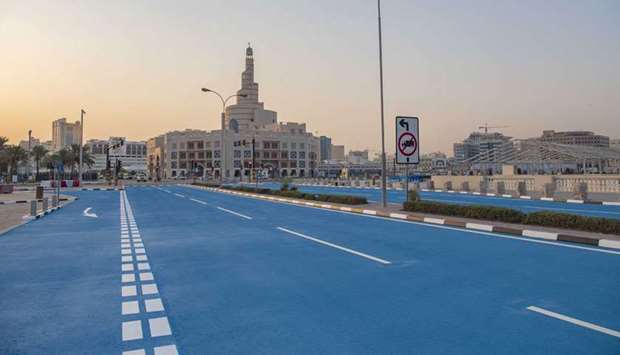 gulf| The Public Works Authority (Ashghal) on Monday completed the implementation of the pilot “cool pavement project”, which involves the use of a substance that brings down the asphalt temperature on roads.

The cryogenic asphalt material has been piloted on parts of the vehicular lanes on Abdullah bin Jassim Street next to Souq Waqif, measuring up to 200m, Ashghal has said in a statement. The stretch where the material has been used is blue in colour, as opposed to the conventional black.

Besides, the material has also been tested on 200m of pedestrian and bicycle lanes in front of Katara – the Cultural Village.

Ashghal said the project will be under study for 18 months and, based on the outcome, its success and wider applicability will be determined. For this, sensors and special devices have been installed along Abdullah bin Jassim Street to measure the effectiveness of the material in reducing asphalt temperature and comparing it to conventional asphalt.

The road has been opened to traffic to test the effectiveness of the material and determine the success of the experiment along with its possible formal application on the road network in Qatar. The sensor readings will be compared for the two types of surface – cooled and normal asphalt – after the 18-month period to determine the course of action.

The pilot project has been carried out in co-operation with Japan’s Oriental Company, which is considered one of the leading firms in the implementation of the new technology.

Unlike conventional asphalt, which contributes to an increase in road temperature by absorbing up to 80% to 95% of sunlight, the “cool pavement” technology reflects UV rays and absorbs solar radiation to a lesser extent, Ashghal has explained, noting that it can have a positive effect on overall temperature reduction.

A number of developed countries, including the US, have adopted this innovation in an effort to reduce high temperatures in the atmosphere, bring down emissions and other air pollutants and thereby conserve the environment, the statement notes.

The technology also helps reduce vehicle tyre friction and extend the road life. “A protective material has been set for the ground marks to protect them from contact with vehicles and to increase their age,” Ashghal said.

By lowering the air temperature in residential areas, “cool pavement” can slow chemical reactions in the atmosphere that cause smog, the statement adds.

Cool paving material can be made from traditional paving materials such as concrete. The new coating of the concrete asphalt layer that reflects about 50% of sunlight consists of four layers of the primary layer followed by three consecutive layers that reduce heat absorbed by solar radiation.