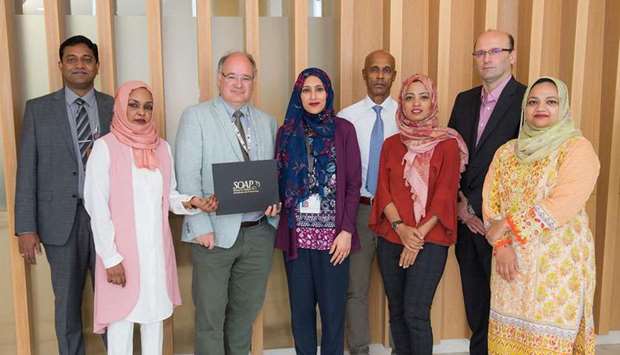 gulf| A research project presented by an anaesthesia team from the Women’s Wellness and Research Centre (WWRC) has been awarded second place in the prestigious Gertie Marx Research Prize competition, organised by the Society for Obstetric Anaesthesia and Perinatology (SOAP) as part of their annual meeting held earlier this year in Phoenix, Arizona, US.

The WWRC team submitted the research paper based on their work comparing the potency of two different medications, phenylephrine and noradrenaline, which are used to prevent low blood pressure associated with the administration of a spinal anaesthetic for women delivering through Cesarean section.

“Our study is one of the first to compare the effectiveness of these two drugs when given as an infusion and to find an evidence-based answer to determine the optimal dosing regimen for women delivering through Cesarean section,” said Consultant Anaesthesiologist and principal investigator of the study , Dr Mitko Kocarev.

Dr Kocarev explained that a common side effect for mothers undergoing a cesarean delivery is low blood pressure as a result of the spinal anesthetic. Dr Kocarev said for the past 15 years phenylephrine has been used to prevent or treat this, underscoring the importance of a study that will support anaesthetists in using noradrenaline appropriately for this purpose.

The study was undertaken at Hamad Medical Corporation’s (HMC) WWRC and recruited a group of mothers undergoing planned cesarean deliveries as part of a randomised controlled research trial.

The findings of the study were presented by Dr Fatima Khatoon, Associate Consultant Anaesthesiologist, one of the study investigators and a former fellow in obstetric anaesthesia. It was the first-ever paper from this region presented at the Gertie Marx Research Prize competition.

Dr Roshan Fernando, Research Lead for Obstetric Anaesthesia at the WWRC, and a member of the study team commented that the concerted effort of the WWRC research team enabled completion of the research in only eight weeks, a process which would have taken at least 18 months in many similar academic institutions.

“I am very proud of the work undertaken by the research team. For this study to be formally recognised at the highest level by the Society of Obstetric Anaesthesia and Perinatology is a wonderful endorsement of the quality of this research and the benefits it can deliver. This study has the potential to positively impact the care delivered to thousands of mothers undergoing Caesarian sections here in Qatar each year, as well as millions around the world,” explained Professor Marco Marcus, HMC’s Chairman of Anaesthesiology, Intensive Care Unit, and Perioperative Medicine.