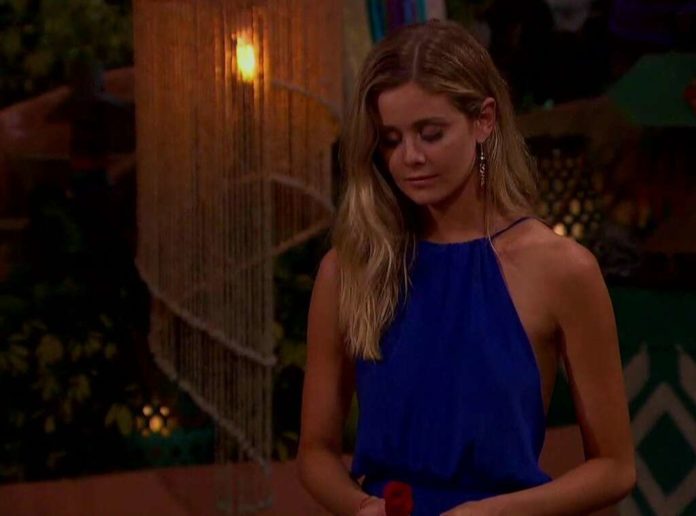 eonline| Bachelor in Paradise finally gave us that fight it’s been promising, and it was just as ridiculous as we always assumed it was going to be, even if we really wish there was better lighting on that beach. It was The Long Night levels of dark!

From what we could see, Jordan started the fight by messing with the pinata Christian had set up for his time with Nicole. Christian then attacked Jordan, and Jordan attacked right back, and they scuffled, and then at one point Christian came charging across the beach to go after Jordan.

Chris Harrison and the BIP producers then informed Christian and Jordan that they’ve got to go, because there is a zero tolerance policy on fighting on this show. Nicole then went back to Clay, and the fight was practically forgotten about.

After what felt like an eternity, we finally got to the rose ceremony, during which Onyeka announced she couldn’t give a rose out and just wanted to leave, leaving the guy who thought he was her rose friend, Cam, in the dust, and in tears. What an odd legacy that man left for himself on this franchise.

Finally, Hannah G. chose between Blake and Dylan, and she chose the guy who had been patiently waiting for her to make her choice for this entire season so far. Everyone thought that meant Blake was out, especially as Kristina was the last one to hand out a rose, but in a baffling move, she chose Blake.

She explained that she thought he still deserved to find love and is a good person, but also…now he has to watch Hannah and Dylan fall in love.

Apparently this was just another thing ruining Blake’s Paradise (after he was concerned the Jordan/Christian fight was going to ruin his Paradise), even as he got another date to go on with a girl named Caitlin. (Who?)

He spent half the date explaining his Stagecoach web (surprise surprise, he also met Caitlin at Stagecoach), and then they did tantric yoga together, and it was a lot but Blake was still imagining a future with Hannah.

The rest of the night was spent with Demi getting emotional over her confused feelings for Derek and also the girl she had been dating back home, and Hannah Brown suddenly arrived to help confuse her more.

The episode ended on a cliffhanger, with everyone dramatically wondering if Demi’s going to leave Paradise and if her relationship with Derek is over, and what could possibly happen next.

We all know Demi’s not going anywhere and we even know that the girl she was dating, Kristian, will be joining the show, and we also know that at some point, Derek and John Paul Jones (who has solidified himself as a Paradise favorite) are going to get into a fight, so we’ll just have to wait to find out how all of it comes together.

Bachelor in Paradise airs Mondays and Tuesdays at 8 p.m. on ABC.

It was a mess, and all the while we were still wondering who the heck Christian even is.