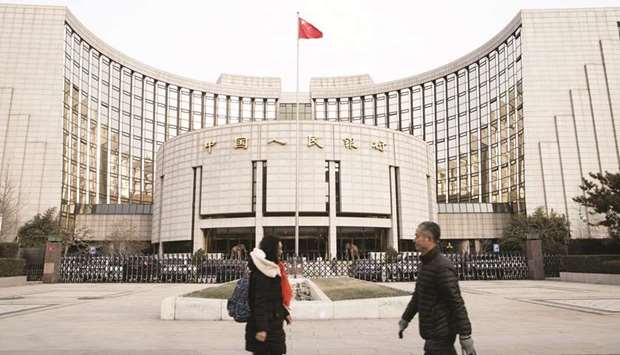 gulf| China’s central bank unveiled a key interest rate reform yesterday to help steer borrowing costs lower for companies and support a slowing economy that has been hurt by a trade war with the United States.

The People’s Bank of China (PBoC) said it will improve the mechanism used to establish the loan prime rate (LPR) from this month, in a move to further lower real interest rates for companies as part of broader market reforms.

Analysts say the move, which came after data that showed weaker than expected growth in July and followed a cabinet announcement on Friday, underscores the government’s attempts to use reforms to support a slowing economy.

“By reforming and improving the formation mechanism of LPR, we will be able to use market-based reform methods to help lower real lending rates,” the PBoC said in a statement published on its website.

The central bank will “deepen market-based interest rate reform, improve the efficiency of interest rate transmission, and lower financing costs of the real economy,” it said.

Chinese banks’ new LPR quotations will be based on rates of open market operations, and the national interbank funding centre will be authorised to publish the rate from August 20, the PBoC said.

It added the rate will be published every month on the 20th, effective this month.

Banks must set rates on new loans by mainly referring to the LPR and use LPR as the benchmark for setting floating lending rates, the PBoC said, adding that banks will be barred from setting any implicit floor on lending rates in a coordinated way.

The central bank said five-year and longer tenors will be added to the existing one-year LPR, which will help banks set rates on long-term loans such as mortgages.

China will add eight small banks, including two foreign-funded banks, to the existing 10 nation-wide banks that will be allowed to submit LPR quotations, the central bank said.

The move followed pledges from China’s State Council on Friday that the country will rely on market-based reform measures to help lower real interest rates for companies.
The central bank said that it will strengthen its supervision on banks’ rate quotations and punish banks for irregularities that disrupt the market order.

The central bank will incorporate LPR application into its macro-prudential assessment (MPA) to urge banks to use LPR pricing.

This week’s data broadly showed China’s economy stumbled more sharply than expected at the start of the third quarter, as the intensifying trade war with the United States took a heavier toll on businesses and consumers.

Second-quarter economic growth slowed to a near 30-year low.

Tang Jianwei, an economist at Bank of Communications in Shanghai, said the reform could be seen as a guided rate cut as PBoC can guide rates of its open market operations, which will be closely followed by the LPR.

“The tool (LPR quotation reform) equals to a guided rate cut, and is only pushed out by the PBoC at crucial moments,” said Dai Zhifeng, analyst with Zhongtai Securities Co.

The central bank has pledged to gradually unify two interest rate “tracks” – its market-based rates developed in recent years and its benchmark bank deposit and lending rates.
Analysts say the new LPR rate will be lower than the current level, but they are divided over the scope of reductions on borrowing costs for firms.

To free up funds for lending and to accommodate local government project financing, most analysts still expect the central bank will cut banks’ reserve requirement ratios (RRR) further in coming months, on top of six reductions since early 2018.

Sources have told Reuters that more aggressive action such as interest rate cuts are a last resort, as it could fuel a sharper build-up in debt.

China’s banks currently price their loans based on the benchmark lending rate that has been kept unchanged since October 2015, hampering the central bank’s efforts to lower borrowing costs.

The PBoC launched the LPR in 2013 to reflect rates that banks charge their best clients.

But the LPR has been reacting little to market demand and supply, with the one-year rate currently at 4.31%, versus benchmark one-year lending rate of 4.35%. China’s short-term money market rates have been falling more quickly in recent months due to the central bank’s cash injections.