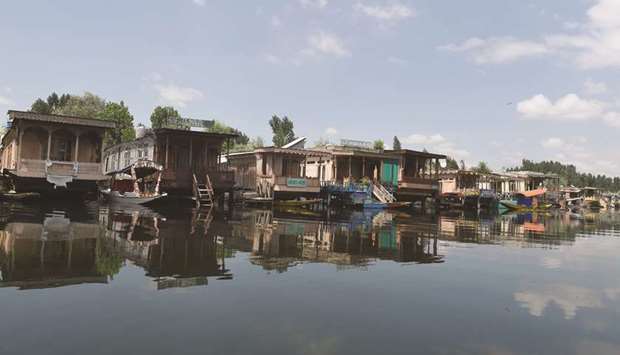 gulf| Authorities reimposed restrictions on movement in major parts of Srinagar yesterday after violent overnight clashes between residents and police in which dozens were injured, two senior officials and eyewitnesses said.

They also reversed a decision to allow Internet and mobile phone use in parts of the Jammu region, according to one official, amid concerns about the spread of rumours online.
In the past 24 hours, there has been a series of protests against New Delhi’s August 5 revocation of Jammu and Kashmir state’s autonomy.

This followed an easing in curbs on movement and phone use on Saturday morning.
The state government has said that it has not imposed a curfew over the past two weeks, but yesterday people were being turned back at multiple roadblocks set up in the city in the past few hours.

Security forces at some roadblocks have told residents there is a curfew.

Two senior government officials told Reuters that at least two dozen people were admitted to hospitals with pellet injuries after violent clashes broke out in the old city on Saturday night.

Representatives in the Jammu and Kashmir government in Srinagar and the federal government in New Delhi did not immediately return calls asking about the latest clampdown or seeking an assessment of the number of injuries and clashes.

One of the official sources said that people pelted security forces with stones in around two dozen places across Srinagar.

He said that the intensity of the stone pelting protests has increased over the past few days.

Chilly grenades contain very spicy chilli pepper, and produce a major eye and skin irritant, as well as a pungent smell, when they are unleashed.

The officials, who declined to be identified, said clashes also took place in other parts of the city including Soura, a hotbed of protests in the past two weeks.

A senior government official and hospital authorities at Srinagar’s main hospital said that at least 17 people came there with pellet injuries.

They said 12 were discharged while five with grievous injuries were admitted.

The hospital officials and a police officer told Reuters that a 65-year-old man, Mohamed Ayub of Braripora, was admitted to the hospital after he had major breathing difficulties when tear gas and chilli grenades were fired in old city area on Saturday afternoon.

He died in the hospital on Saturday night and has already been buried, they said.

Javed Ahmad, aged 35, and from the wealthy Rajbagh area of Srinagar, was prevented from going to the old city early yesterday morning by paramilitary police at a barricade near the city centre.

“I had to visit my parents there. Troops had blocked the road with concertina wire. They asked me to go back as there was curfew in the area,” he said.

Telephone landlines were restored in parts of the city on Saturday after a 12-day blackout, and remained open yesterday.

The Internet and cell phones remain blocked in Kashmir.

More than 500 political or community leaders and activists remained in detention, and some have been flown to prisons outside the state.

Critics say the decision to revoke autonomy will cause further alienation and fuel the armed resistance.

The change will allow non-residents to buy property in Jammu and Kashmir, and end the practice of reserving state government jobs for local residents.

Prime Minister Narendra Modi’s government has said the measure is necessary to integrate Kashmir fully into India and speed up its development.