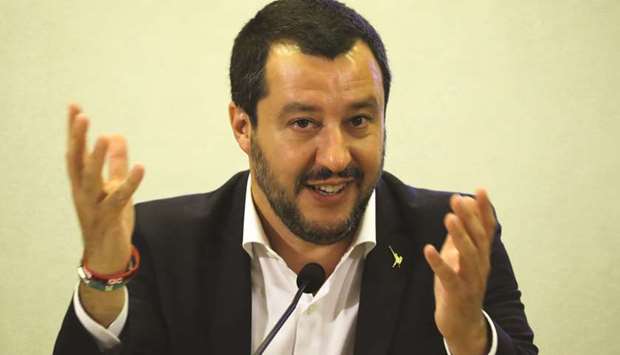 gulf| Italy’s anti-establishment 5-Star Movement (M5S) said yesterday that Matteo Salvini, leader of the far-right League, is no longer a credible partner, apparently closing the door on any possibility of resurrecting the ruling coalition.

Top brass of M5S met yesterday at the villa of the movement’s founder, comedian Beppe Grillo, to discuss their stance after Prime Minister Giuseppe Conte addresses the Senate tomorrow on the government crisis.

“All those present were agreed in defining Salvini as no longer a credible interlocutor,” M5S said in a statement.

Among those at the meeting were M5S leader Luigi Di Maio, its speaker of the lower house Roberto Fico, and Alessandro Di Batista, who is not in parliament but is perhaps its most charismatic politician with a large personal following.

On August 8, in an attempt to capitalise on his surging popularity, Salvini announced that his alliance with M5S was no longer workable and called for elections that could crown him as prime minister.

However, his move has not gone to plan.

The League put forward a motion of no-confidence in the government, but M5S and the opposition Democratic Party (PD) refused to debate it, and their politicians are now openly discussing forming a coalition among themselves to sideline Salvini.

Alarmed at the prospect of losing power, Salvini has softened his stance and indicated that he would be ready to carry on governing with M5S, perhaps with a re-shuffle of cabinet members, but has so far been spurned by his erstwhile allies.

Salvini said after M5S’s statement that he would listen to Conte with an open mind, and that his main concern is now the risk of a M5S/PD government which he would “do all that is humanly possible to prevent”.

However, speaking at an event near the Tuscan town of Lucca, he added that he did not have the votes in parliament to block such a “government of losers”, a reference to the fact the League came first in recent European elections and leads in opinion polls.

He made clear that he was no longer determined to sink the government, saying that if Conte “sets out a path that is good for Italy, who am I to say no?”
On the other hand, the League will organise street protests if M5S and the PD hook up “because the sovereignty of the country is at stake.”

M5S said that Salvini had proven himself to be untrustworthy and described his recent overtures towards them as “a shameful U-turn in which he is trying to dictate conditions without any credibility”.

The party said it regretted that Salvini’s behaviour had ruined its collaboration with the League’s members of parliament, with whom it had worked well since the government was formed 14 months ago.

The M5S has been hurt by its tie-up with the League, halving its voter support since the two parties joined forces in June last year, according to opinion polls.

The League has overtaken it to become Italy’s most popular party.