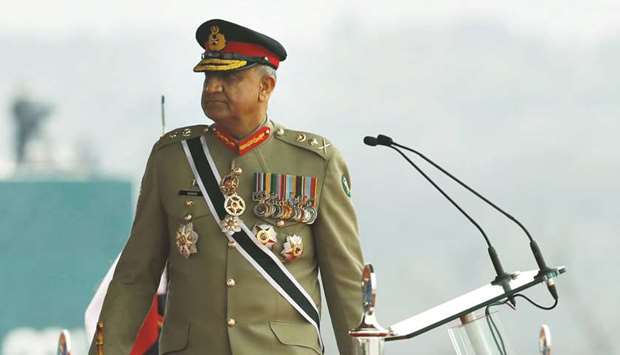 gulf| Pakistan has extended its military chief’s tenure, ensuring stability in what is arguably the country’s most powerful position as tensions soar with rival India and Washington is expected to announce a withdrawal deal in Afghanistan.

“General Qamar Javed Bajwa is appointed as chief of army staff for another term of three years,” read a statement signed by Prime Minister Imran Khan and released by his office. “The decision has been taken in view of the regional security environment.”

Bajwa had been due to retire in November after the completion of his current term.
The extension, which had been widely expected, was also confirmed by the military’s spokesman.

The Pakistani military has long played an outsized role in national life, ruling the country for roughly half its 72-year history and offering the muscular reassurance against nuclear arch-rival India that many Pakistanis see as vital to their identity.

Bajwa was appointed to lead the military in 2016 by then-prime minister Nawaz Sharif.
Bajwa’s predecessor General Raheel Sharif was the only military chief who served for a single term in two decades.

Previous army chiefs either did not complete a full three-year term, or remained in power for longer, such as Pervez Musharraf who was in the role for nine years and also held the post of president.

Bajwa’s extension marks the second time in nearly a decade that the country’s top general had their traditional three-year term extended.

It comes as tensions have skyrocketed with New Delhi after Prime Minister Narendra Modi stripped the disputed Kashmir region of its autonomy earlier this month.

US President Donald Trump urged the nuclear-armed rivals over the weekend to come back to the negotiating table, conveying to Prime Minister Khan the importance of “reducing tensions”.

Both India and Pakistan have controlled portions of the former princely state of Kashmir since independence in 1947.

The dispute over the Muslim-majority region has been the spark for two major wars and countless clashes between them.

Earlier this year they again came close to all-out conflict, after a militant attack in Indian-held Kashmir in February was claimed by a group based in Pakistan, igniting tit-for-tat air strikes.

The Pakistani military is also believed to be playing a vital role in ongoing peace talks between the US and Taliban that aim to secure a withdrawal of American troops in exchange for insurgent promises that Afghanistan will not be used as a safe haven for groups such as Al Qaeda or Islamic State.

Pakistan’s influence over the group, which has waged an insurgency since it was ousted from power by US-led forces in 2001, is seen as key in facilitating a political settlement with the government of Afghan President Ashraf Ghani.

Talat Masood, a military analyst and retired general, said the need for continuity was at the heart of the decision.

“I don’t think Pakistan would have thought of a change in command in these circumstances,” he told AFP.

The understanding between Prime Minister Khan and Bajwa “has been excellent”, he added.