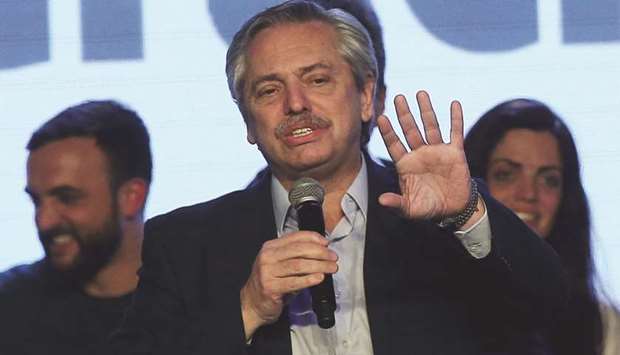 gulf| For Luis Joaquin Caro, who was about 2 years old when Argentina last defaulted on its debt in 2001, casting his vote for left-leaning Peronist candidate Alberto Fernandez in the country’s recent primary election was a no-brainer.

“During the Kirchner years, I lived very well,” he said, referring to what now seems like a bygone era of his young life before four years of spending cuts and austerity measures under President Mauricio Macri.

“Today, it’s not like that,” said Caro, who is from a working-class part of Buenos Aires Province.

The 21-year-old said he had always seen former president Cristina Fernandez de Kirchner and her late husband former president Nestor Kirchner — whose consecutive terms spanned 2003 to 2015 — as champions of the workers.

Cristina Kirchner, a polarising figure in Argentina, is the running mate of Fernandez, whose landslide victory over Macri in the August 11 primary wrong-footed pollsters and shocked investors, who worry that Argentina may fail once again to pay its debts if the left returns to power.

Argentine markets plunged into a nosedive last week amid growing fears about a rerun of “Kirchnerismo”, when Argentina had currency controls and other interventionist policies.

Caro’s sentiments are emblematic of a groundswell of support for Fernandez among younger voters which, while not altogether unexpected for pollsters, shocked them in its magnitude.

Part of the challenge for pollsters in Argentina was that young voters, one of the demographics most impacted by high unemployment, are less likely to have a conventional phone where canvassers can reach them — a factor also cited by polling firms in Britain and the United States after upsets in recent years.

For Caro and many other young voters in Argentina, talk of the pain surrounding the 2001 crisis was eclipsed by generous social benefits and subsidies under the Kirchners’ that helped pluck their families from poverty after the debt default.

“The years of Kirchnerism that I lived during my childhood, I lived very well and maybe at that time, I did not realize it,” said Lucila Servelli, 16, who voted for the first time on Sunday, though voting is not compulsory for 16-18 year olds.

“But comparing it with now, many things have changed. Now, my family had to give up many things,” said Servelli, who was not born when Argentina defaulted in 2001.

Young voters have far less in common with Macri, whose term has focused on free-market reforms by stimulating foreign investment and a promised economic recovery that failed to materialise, said political analyst Julio Burdman.

Macri’s image is saddled with resentment at high unemployment, especially among younger Argentines, he added.

To make matters worse, salaries have eroded significantly. That is an extra sting for young voters who are new to the workforce and feeling the pinch in their own pockets for the first time.

For others like 16-year-old Pilar Gil Navarro, the support for Kirchnerism is not just about economics.

For her, the Kirchnerist agenda, which is more liberal on social issues, is more in line with her values.

“One of the issues that I want to deal with is legal, safe and free abortion,” Navarro said.
“In the Macri government, there is no ministry of health, which is something Fernandez said is important as a matter of public health.”

There is also a certain cache attached to Kirchnerismo, which counts high-profile actors and musicians among its supporters, analysts said.

Straight-laced Macri, whose supporters are mostly over 50, is viewed as a polar opposite from the Kirchnerismo image of questioning the status quo and confronting an established order.

“That, for a young person, is much more seductive than a conservative agenda,” said Facundo Nejamkis, director of polling firm Opina Argentina.

Argentine millennials and “generation Z” voters are one of the demographics most impacted by poverty and unemployment, making them even less accessible to pollsters who often reach voters by phone and internet.

“One of the explanations, for why in almost all the surveys we failed to calculate the number of votes between Fernandez and Macri, is precisely not having been able to detect the sufficient number of young people.

They don’t answer the landline or because they just have mobile phones for surfing the web,” Nejamkis said.

Chris Jackson, US vice president for Ipsos Public Affairs, said the polling challenge takes on another dimension in Argentina because more affluent young people, who tend to be more accessible to phone and internet research, are more tilted towards Macri, potentially skewing results.