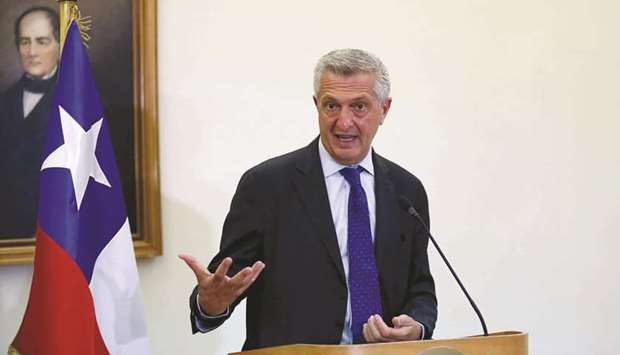 Grandi had planned to visit the Brazilian border town of Pacaraima this weekend, but authorities advised him to cancel due to protests by residents unhappy with the arrival of more than 500 Venezuelans a day.

Pacaraima residents closed shops on Saturday and marched through the streets to shouts of “Out with the Venezuelans,” “Pacaraima is ours,” “Out with the UN,” and “Brazil for Brazilians.”

The UNHCR estimates 4.3mn Venezuelans have fled economic and political turmoil in their country, mainly to Colombia where there are 1.2mn and to Peru, Chile and Ecuador. Some 180,000 have stayed in Brazil.

The UN and NGOs put out a humanitarian appeal for $770mn at the start of the year and has received less than $180mn, Grandi said in a telephone interview after visiting Chile and Brazil.

“This is really one of the most under-funded humanitarian appeals in the world for one of the biggest crises,” he said.

Financial institutions such as the World Bank and the Inter-American Development Bank are engaged but need to speed up their help, he said, to help sustain health and education
systems.

“We protect the more vulnerable, but the rest has to be done by bigger actors with more money, and I don’t see that happening yet anywhere in the region,” he said.

Grandi said there were signs of anti-immigrant sentiment spreading across the region, reflected in mounting restrictions on the movement of Venezuelans
in Andean countries.

But he praised Chile, which has received 400,000 Venezuelans, for granting safe passage and a guarantee of asylum.

He also lauded the Brazilian Army for a “particularly good and very humane” operation to receive Venezuelan migrants in the northern border state of Roraima, Brazil’s poorest, from where they are being relocated to other parts of the country.

Grandi said relocation had to be sped up because the refugee crisis was overburdening fragile services in the Roraima capital of Boa Vista, where thousands sleep in the street every night because shelters are full up.

Without more aid, Grandi warned of growing hostility towards Venezuelans.